Catholics in France were recently confronted by Antifa-like agitators in the streets during a procession to honor the 150th anniversary of the martyrdom of Catholics killed by the Paris Commune.

The agitators shouted menacing slogans: "Down with the clergy!" "Death to Fascists!"

Paris, July 7.– On Saturday, May 29, 2021, Catholic parishes in the 20th district of Paris organized a pilgrimage to honor the memory of Archbishop Georges Darboy, 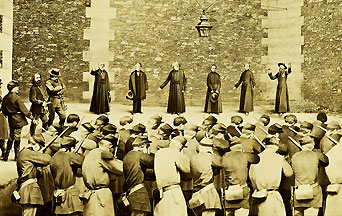 Execution of clergy in Paris several priests and other religious killed by members of the Paris Commune in 1871. The historic episode became known as the “Haxo Street Massacre.”

About 300 faithful Catholics, priests, and religious took part in the pilgrimage/procession, led by the auxiliary bishop, Most Rev. Denis Jachiet. The destination of the 2.5-mile procession was the parish of Our Lady of Hostages. The church marks the spot where, 150 years earlier, forty-nine hostages, including ten men religious, were shot by Communards—the atheist, anticlerical activists of the Commune. No sooner had the procession started than passersby and people sitting at tables in open-air cafes began to jeer and insult the faithful.

A Peaceful Procession Interrupted by Violence

The procession continued undaunted. A hundred yards ahead, it passed the Père Lachaise cemetery where pro-commune demonstrators waited. Carrying red flags, they tried to stifle the religious hymns of the faithful with the menacing slogans: “Down with the clergy!” “Death to Fascists!” These same agitators had just taken part in a leftist demonstration to commemorate the “martyrs of the Commune,” who were killed in the provisional government’s bloody repression of the revolutionary movement.

The procession was then interrupted by the twenty hooded youths shouting “antifa” slogans ...

back to top
All progress has resulted from people who took unpopular positions.
Adlai Stevenson

We have 556 guests and no members online