Pope Francis’s encyclical Fratelli Tutti presents a dilemma for all who defend the right of private property. On the one hand, the teaching document Pope Francis signed on October 3 questions this 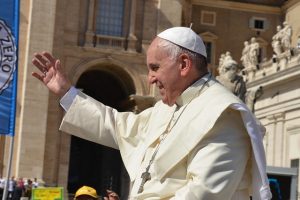 right. On the other, past popes, theologians, and canonists have always taught that private ownership, as it is largely practiced, is just and necessary for society’s proper functioning. This clash of opinions leaves many Catholics perplexed.

This is no small debate. The stakes could not be higher since the West depends upon a system based on property, rule of law and free markets. The pontiff asks his readers to consider “re-envisaging the social role of property.” He would like to see great societal changes in America and the West. He believes the world’s goods belong to everyone and must be shared to ensure the proper dignity of all. That sounds like something vaguely similar to communism. His broadsides against the market and “consumerist” economic models leave little doubt that he is not calling for a few system tweaks but a massive paradigm shift.w to respond to this pontifical demand lest it sink the West into a Marxist tyranny that denies property rights.

The Universal Destination of Created Goods

Indeed, the Church teaches that God made the goods of the world for everyone. No one contests this truth. Catholic moralists universally accept the classic example of the right to life being of a higher order than private property. Everyone also recognizes that property has what is called a social function by which owners must go beyond self-interest and also use their property to serve the common good.

However, the Church defines the limitations of this social function. These limitations may be debated without property rights requiring to be “reimagined.” Such a discussion would give balance to the proposals for dealing with the needy.

If, during the discussion, Catholics were instructed in the Church’s traditional teaching, they would learn that “the universal destination of created goods” does not mean that property-owners are little better than thieves who deprive the needy of the goods to which they have a right. The poor do not have the right to take arbitrarily by force whatever they consider they need from those who have property.

Quite the contrary, the correct position posits that the holding of private property is good and desired by God. It favors the good order of society. In his 1891 encyclical Rerum Novarum, Leo XIII states that “The fact that God has given the earth for the use and enjoyment of the whole human race can in no way be a bar to the owning of private property. For God has granted the earth to mankind in general, not in the sense that all without distinction can deal with it as they like, but rather that no part of it was assigned to anyone in particular, and that the limits of private possession have been left to be fixed by man’s own industry, and by the laws of individual races …Here, again, we have further proof that private ownership is in accordance with the law of nature.”

In his 1931 encyclical Quadragesimo Anno, Pius XI recognizes the “twofold character of ownership, called usually individual or social according as it regards either separate persons or the common good. For they [the theologians] have always unanimously maintained that nature, rather the Creator Himself, has given man the right of private ownership not only that individuals may be able to provide for themselves and their families but also that the goods which the Creator destined for the entire family of mankind may, through this institution, truly serve this purpose. All this can be achieved in no wise except through the maintenance of a certain and definite order.”

Indeed, the poor suffer when private property is denied. The ravages of communism prove that when property is confiscated in the people’s name, it destroys economy and culture, reducing all to the most abject misery.

A Divisive Vision of Property

Moreover, his urgent appeal to “re-envisage the social role of property” fails to recognize the economic advances by which private property has benefited society as a whole. It straightjackets all owners into an oppressor category in which they do not belong.

Above all, Francis expands property-owners’ obligations to the needy. They no longer include just the bare minimum to support their right to life. For Pope Francis, property owners must provide the destitute with an array of undefined and open-ended needs that entails ensuring that “every person lives with dignity and has sufficient opportunities for his or her integral development.”

The Wrong Foundation for Judgment

Absent from this vision is a correct understanding of the social function of private property, which Pius XII claims “should flow to all alike, according to the principles of justice and charity.” In its place, the needy, aided by leftist media and social activists, become the judges of what is necessary for their “integral development.”

The Church encourages benefactors to gain merit by voluntary acts of charity, giving to the needy from their wealth. It does not force charity. Likewise, the Church teaches that the needy must practice the virtue of justice by rendering gratitude, respect and assistance to their benefactors. When both parties listen to the Church, it gives rise to social harmony. However, in Fratelli Tutti, there is no mention of the obligations in justice that the needy have toward their benefactors.

The encyclical replaces these virtuous behaviors of charity and justice with the spirit of “liberty, equality and fraternity,” the anti-Christian and bloody French Revolution’s trilogy. Thus, Christian charity is replaced with that of anti-Christian “fraternity.” Such a deterministic conception of society holds that social and economic structures are responsible for poverty. The Marxist cry for the end of all private property finds a distant echo in the document’s appeal for the priority of the “universal destination of created goods over all rights, including private property.”

A Shallow Appeal to All

Addressed to the world at large, Francis issues an invitation “to dialogue among all people of good will.” He addresses “a single human family, as fellow travelers sharing the same flesh, as children of the same earth which is our common home, each of us bringing the richness of his or her beliefs and convictions, each of us with his or her own voice, brothers and sisters all.”

Thus, the appeal reduces everything to the lowest common denominator so that none may be left out or offended by the other. There is nothing specifically Catholic about this message that tries to be all things to all people. The result is a shallow “fraternity” that makes no judgments between truth and error, good and evil, virtue and sin. It trumpets an empty charity that is not based on the love of God and an integral development that is unrelated to salvation.

The most perplexing part of the encyclical’s call for “re-envisaging the social role of property” is that it does not explain why the Church needs to re-envisage. The treasury of Church teaching on property’s social function is rich, if largely unapplied in today’s secular, godless world. Why not apply the Church’s forgotten truths, which would bring beauty, clarity and social harmony to society? This strange encyclical, which is addressed to everyone in general and no one in particular, omits the only real solution to our world’s troubles: The return of prodigals to the one true God and the one true Church.

Indeed, one can be forgiven for asking: “I’m Catholic. Can I disagree with Pope Francis on property?”

I hate quotes. Tell me what you know.

We have 937 guests and no members online