Tuesday, Nov. 8, is Election Day in the United States (although many voters already will have voted by mail or at an early voting location). As Catholics, we see responsible citizenship as a virtue, and thus participation in the political process is not only a right but also a duty. And so, as Catholics and as American citizens, we should exercise the right and duty of our citizenship by voting. And while candidates for President and Vice-President are not on the ballot, this “midterm” election will choose a governor, a senator, representatives for the House of Representatives along with several other state and local officials.

Of course, these days there is great disaffection with politics: The hopes people place in politics are more often frustrated than fulfilled. St. Paul, the great Apostle to the Gentiles who died martyred in Rome, never overestimated the possibilities of politics. A few Sundays ago, in the second reading of the Mass, St. Paul offered this piece of sage advice to Timothy, his protégé and later co-worker: "First of all, I ask that supplications, prayers, petitions, and thanksgivings be offered for everyone, for kings and for all in authority, that we may lead a quiet and tranquil life."

The way I understand St. Paul here is that while we pray for kings and those in authority, we do so not to endorse them or their policies but so that they leave us alone so that we can worship the Lord in hope, witness to his truth in faith and serve our fellow men in love. Our Prayers of the Faithful often include prayers for political leaders: We pray that they work for peace and in the interest of the common good.

Our Church rightly does not tell the faithful to vote for any candidate or party. The Catholic Church is not — nor does she want to be — a political agency or a special interest group. However, she does have a profound interest — and rightly so — in the good of the political community, the soul of which is justice. For this reason, the Church engages in a wide variety of public policy issues including the defense of unborn life, of religious liberty, and of marriage as a union of one man and one woman, as well as advocacy on issues concerning immigration, education, poverty, and racism, along with many other concerns.

But as Andrew Breitbart’s famous quote, “politics is downstream from culture” 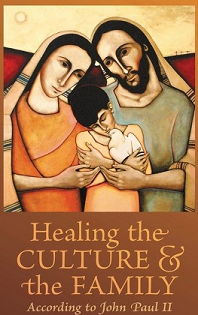 reminds us: As people change their beliefs about what is good and true (i.e., their culture), their politics change as well. Pope St. John Paul II, who survived both Nazi and communist tyrannies, understood this. In fact, when bishops would meet John Paul II for their ad limina visits, he wouldn’t ask them what they were doing to change the politics in their particular countries. Rather he would ask them, what were they doing to change the culture?

Politics — or politicians — follow the culture. Ted Kennedy, Al Gore, Jessie Jackson, Joe Biden, and many others all started their political careers as "pro-lifers." Don't think when they became "pro-choice" their flip-flopping was in any way a “profile in courage.” They had their finger in the air and sensed a change in the winds of our culture, at least among that of their constituencies. The same with President Obama and other politicians on so-called "gay marriage." They were against it before they were for it. No profile in courage here either.

Our culture today is deeply wounded by individualism, by narcissism; it is wounded by a materialism that denies the transcendence of the human person. This explains a lot about why our politics are so polarizing and why Catholics can feel “homeless” in either political party. Too often, we are not given to vote for the “best candidate” but rather to opt for the least “worse” candidate.

The stridency and polarization of politics in America today can be discouraging. We need a new kind of politics — one focused on moral principles, not on polls; on the needs of the vulnerable, not the contributions of the powerful; and on the pursuit of the common good, not the demands of special interests.

Pope John Paul II wrote in Evangelium Vitae: “...we are facing an enormous and dramatic clash between good and evil, death and life, the ‘culture of death’ and the ‘culture of life’. We find ourselves not only ‘faced with’ but necessarily ‘in the midst of’ this conflict: we are all involved, and we all share in it, with the inescapable responsibility of choosing to be unconditionally pro-life.”

While we cannot expect any miraculous cures, we have to hope for healing. We can heal our politics when we heal the culture.

Originally published in Archbishop Thomas Wenski's column for the October 2022 edition of the Florida Catholic monthly.

We have 1028 guests and no members online