Tel Aviv, Sept.6.– At least five rockets have been fired from Gaza toward Israel, with 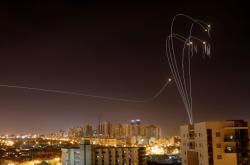 one landing near Sderot, according to the IDF, which retaliated by attacking an observation post in northern Gaza with tanks.​

One of the rockets landed in an open area near Sderot, causing a fire to break out with minor damage. No casualties have been reported.​

The rockets were launched on Friday night, just a few hours after two Palestinian teenagers were shot dead during the ongoing Great March of Return protest at the Gaza border. Friday’s protest saw approximately 66 protesters injured by Israeli soldiers in what the IDF claims were “especially violent” demonstrations.
(...)

Please, help with your valued donation to offset the cost of maintaining this site and to assist us in our quest for democracy and human rights.
This site does not receive funds
from any government or institution.
Any amount in any major currency, from $1 up, makes a difference!
Just write down your generous donation to Democracy
in the space below:

PAYPAL is the safer & easier way to contribute. You may use your credit card too. Thanks for your generous donation! For more info: freedom@participatorydemocracy.net.